Get fresh music recommendations delivered to your inbox every Friday.
We've updated our Terms of Use. You can review the changes here.

by Jon Durant and Stephan Thelen 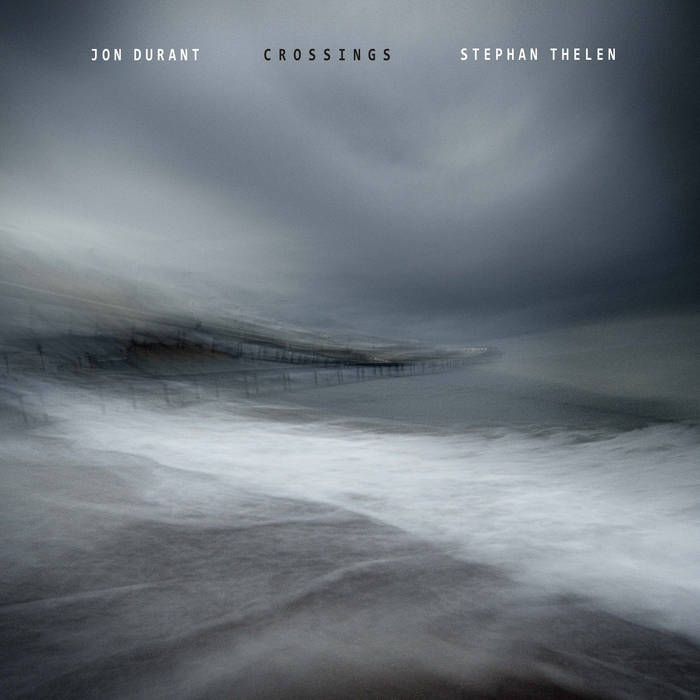 Dr. "Buzz" Frenzy (Matthew J Hesse) Gorgeous, nuanced soundscapes that sometimes drift and wash, sometimes bubble and pulse, swirling, humming, always moving forward into its unfolding. At once complex and hauntingly straightforward. Reminders of my favorite Torn and Fripp. I could listen to this for hours. Favorite track: Fractal 5.7.

From his back door in Portland, Oregon, Jon Durant can see the Sellwood Bridge spanning the Willamette River in Portland. When Stephan Thelen steps outside his home in Switzerland’s Oberrieden on the shore of Lake Zürich, he can see the snow-capped Glarus Alps. Two guitarist composers living near two very different bodies of water in two very different parts of the world.

Looking back on how Stephan Thelen and Jon Durant brought their respective viewpoints together in 2017, it seems like a very different world indeed. Durant, perhaps best known for his work with Burnt Belief, came from Boston to Kingston, NY to see Thelen’s band Sonar, then touring with David Torn. That particular crossing led to Thelen inviting Durant to contribute to 'Briefing For A Descent Into Hell', a track from his 2019 release, Fractal Guitar. Discovering an empathy toward each other's work it seemed natural and obvious to the pair that their partnership could extend into a range of other sonic environments. “We did a lot file sharing and I was very pleased how incredibly good, fast, and reliable working with Jon was,” recalls Thelen.

As 2020 saw the world become a more insular, and in many ways, a smaller place in the face of the pandemic, music files crossing over five thousand miles in the click of a button as they worked on Thelen’s Fractal Guitar 2, led in turn to a deepening partnership, says Thelen. “In April 2020, during the lockdown, Leonardo Pavkovic at Moonjune asked me to provide a piece of music for a sampler album he was planning to release. I immediately thought of doing a duo with Jon. I decided to revisit the title track from my 2004 solo album, Vol de Nuit, which we recorded as a homage to two of our favorite guitarists, Robert Fripp and Terje Rypdal.”

Through ambiguous, percolating wisps and insistent pulses moving in and out of the foreground, Vol De Nuit’s keening melodies reach out, touching the heart as much as the head. Given the energy and harmonious interplay between the two, the notion of doing a full album together was a welcome development.

Durant remembers being excited at the prospect of them working together especially as it coincided with an intense burst of creativity. In addition to his work with Thelen, several other projects were in progress including tracks with ex-Porcupine Tree bassist, Colin Edwin as part of Durant’s Burnt Belief as well as a new album with sound designer, Peter Chilvers, best known for his work with Brian Eno. “Working simultaneously on different things meant the time difference between America and Europe played a role in how things evolved. I would frequently wake up to find that a new idea was waiting in my inbox. Whether it was a track from Stephan, Peter or Colin, they’re all several hours ahead of me. For several months, I never knew what I’d be encountering on each new day, and the wonderful surprises that I found were incredibly inspiring. And all so very different from each other!”

Mise En Abyme and the title track also came from Thelen’s solo back catalogue but here given dazzling new interpretations. On Crossings, for example, Stephan’s loops and e-bow are augmented by Durant’s electric 12-string and pitch-shifted low tones, topped by the elasticated sound of a fretless lead guitar. With most pieces initially starting out in Switzerland, Durant found himself responding with textural and melodic ideas in a quick spontaneous manner before returning it to Thelen. The album's penultimate track, Dream Sequence, reversed that process, making its journey from Portland to Lake Zürich with fretless guitar percolating through Durant's processors suggesting bass and drums bedded down deep in the electronic flora and fauna. “Working with Stephan offers me a chance to explore in ways I wouldn’t necessarily do on my own, and it challenges me to step up my game and let my playing be more extroverted,” comments Durant.

That rapid accretion of ideas resulting in the layers, moods, and atmospheres that are captured on Crossings come suffused with a vitality and energy that flows back and forth between these two artists. A sonic conversation of sorts, edited and honed into a series of elegant and sometimes emotional statements, the album is a vivid, engaging presence inviting listeners to join Thelen and Durant as they journey from one side of the world to the other. In precarious times such as these, it’s a comforting thought to know we’re in such good company.