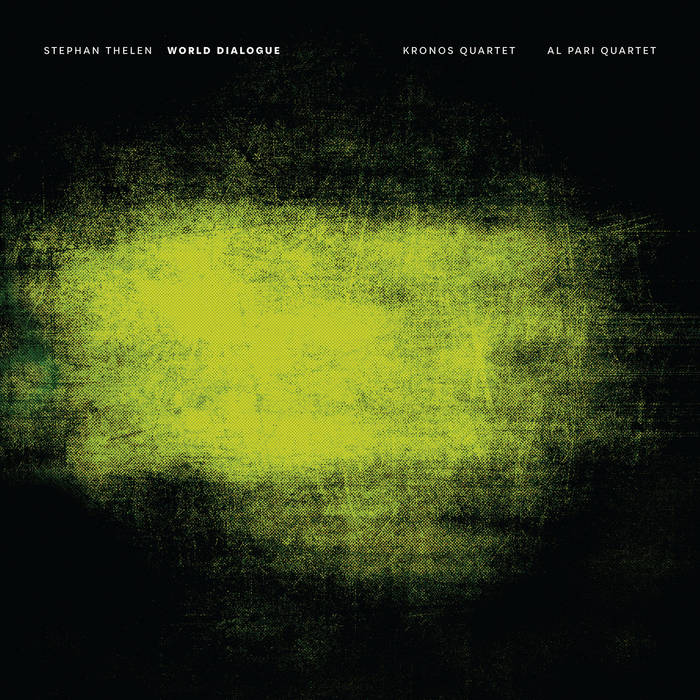 John Simms On the first track, the Kronos Quartet plays a composition Stephan Thelen wrote for it. Kronos is and for a long time has been my favorite for contemporary art music. It is very selective about what it chooses to perform, and everything it chooses to perform is well worth listening to. The other three tracks are also superb Thelen compositions, here performed superbly by the Al Pari Quartet.

sumbuk This is a marvelous set of pieces for string quartet written in Mr. Thelen's "minimalist groove" style. While Kronos needs no introduction, I would like to praise the playing of the Al Pari Quartet here as well. If you like this I would also recommend Thelen's Music For Strings, which has an alternate version of World Dialogue.

In April 2014, music journalist Anil Prasad was sitting in composer Stephan Thelen’s Zürich flat listening to a demo of his first string quartet titled “World Dialogue.” As a longtime admirer of his work with Sonar,  Prasad was fascinated by how Thelen combined his minimalist groove compositional approach with the mercurial nuances only a string quartet is capable of exploring.

Thelen told Prasad a dream of his was to have Kronos Quartet record one of his compositions. Between 2013-2014, Prasad had spent many hours with David Harrington, Kronos Quartet’s founder and violinist, on a major interview feature for his magazine, Innerviews. Prasad felt Thelen’s approach was perfectly suited for the quartet, who had previously recorded minimalist works by Philip Glass, Steve Reich and Terry Riley.

Despite Kronos Quartet being among the busiest performing ensembles in the world, Prasad asked Kronos to consider Thelen’s work for its repertoire. Thelen sent Harrington the demo recording and score. Prasad followed up with Harrington, who said “It’s a very beautiful, propulsive piece. I’m going to write Stephan back this evening.”

Thelen came to visit San Francisco, where both Harrington and Prasad live, in May 2016. Prasad organized a meeting between the two, and Harrington told Thelen how impressed he was with his work, but said he’d like to commission a new piece instead for the ambitious series 50 for the Future: The Kronos Learning Repertoire. The idea was to create a diverse library of 50 works designed to reflect Kronos’ elastic capabilities and create a new body of work for young musicians to freely access and perform. The result was “Circular Lines.”

“David is an extremely enthusiastic and knowledgeable music lover and was very supportive in every way,” said Thelen. “He liked the piece very much and said that rhythmically, it was the most challenging piece they had ever played. It’s tightly-focused and propulsive in the post-minimalist tradition of tonal and rhythmic music that aims to create maximum effect with minimum means. I wanted the piece to be based on a 3-against-4-against-5 polyrhythm in which one instrument plays in 3/8, one in 4/8 and one in 5/8, while the fourth instrument—the wild card—either plays melodies on top of this continuum or supports one of the rhythmic layers.”

As with many Kronos Quartet commissions, Harrington wanted to ensure the composition was socially relevant in the complex times we live in.

“During the period in which the piece was written, the dominant theme in Europe was the refugee crisis and how selfish governments failed to find a compassionate way to deal with the unimaginable suffering they faced,” said Thelen. “The fact that I was constantly thinking about the crisis found its way into the piece. Especially haunting for me was the image of people who would rather risk their lives getting into a ramshackle boat heading towards an unknown and potentially hostile future than stay in their home country. Yet, despite all the suffering, many maintain hope and optimism, a fact which resonates throughout the piece.”

Kronos Quartet went on to record the composition, included on this album. It has been played several times by the group across the world since its live debut in June 2017 at the San Francisco Switchboard Festival. The Al Pari Quartet, a Polish, all-women ensemble, heard Kronos Quartet’s rendition of “Circular Lines” and began performing it at their own concerts. News of their interest in Thelen’s work reached him and he went on to collaborate with them as well on the other three pieces in this album.

"They told me David had encouraged them to play ‘Circular Lines’ to strengthen their internal rhythm as a quartet," said Stephan. "I knew how difficult the piece was to play and I was astonished at how tight and precise they were. They also played the melodies with an Eastern European attitude—very dynamic, with dark passion—exactly the way I like it. Al Pari Quartet’s members are very young and very broadly trained. They grew up in a time when young musicians have to learn to play almost any style with ease."

Al Pari Quartet went on to record "World Dialogue" for this album—the original piece Thelen had Kronos in mind for.

"‘World Dialogue’ was written in 2006 when I was experimenting with additive rhythms,“ said Thelen. "I had an idea in 7/8 + 8/8 which seemed to have a lot of potential. As I started writing different variations, the concept emerged of having those in different keys to make it harmonically more interesting. Doing this systematically, I went backwards through the circle of fifths, starting in G, then C, F, and so on, until finally coming back home to G at the end of the piece."

“I had been carrying an idea around to do a piece in 13/4 using a technique I call ‘twofold covering,’ in which two instruments play the same motif, but with one instrument playing it an octave lower and half as fast,” said Thelen. “The quartet also asked me to base the composition on traditional Silesian music and gave me some recordings to listen to. You’ll hear those influences particularly in the middle section of the piece.”

The approach Thelen used on “Silesia” carries over into “Chaconne,” also recorded by Al Pari Quartet.

“You’ll find another take on the ‘twofold covering’ technique in ‘Chaconne,’ this time in 11/4,” said Stephan. “For example, in the first bar, the viola plays the same melody as the second violin, only half as fast and one octave lower. This method radically changes the way audiences perceive the music, because it creates a lot of exciting motion with elements of the composition moving back and forth in space.”

These collaborations with Al Pari Quartet and Kronos Quartet have opened up the creative floodgates for Thelen. This album is first in a series of new music projects he’s pursuing, after a career previously focused on art-rock output.

"With string quartets, the possibilities are endless, rhythmically, melodically, harmonically and sound-wise," said Thelen. "I look forward to composing more music based on the polyrhythmic, minimalist groove concept. It’s a very young style with lots of uncharted territory to explore. It’s fairly accessible, pleasing to the ear and aesthetically satisfying, because it organically develops complexity out of simple, but rewarding ideas."

Mark Sullivan, All About Jazz: www.allaboutjazz.com/world-dialogue-stephan-thelen-rarenoiserecords

1. Circular Lines (10 :09)
Performed by and written for the Kronos Quartet

4. Silesia (15:02)
Performed by and written for the Al Pari Quartet

All compositions by Stephan Thelen